Someone recently asked how to support uninstall in dotNetInstaller, specifically with MSI components. It’s a question that comes up frequently, and it’s a powerful feature of dotNetInstaller. We use it for a very large bootstrapper (1.2GB) across a dozen installers, including some big ones that we didn’t write (IBM Cognos).

While the documentation explains the basics, it’s a bit thick. This is a step-by-step tutorial.

Create a basic WIX MSI, MySetup. I’ve added a dummy component and feature to it.

Create a simple bootstrapper that installs MySetup.msi. Add an Installed Check and package the MSI in the bootstrapper.

Note that the GUID matches the UpgradeCode in the WIX MSI we have created above.

You can now link the bootstrapper with InstallerLinker. We’ll use MSBuild to automate our build. 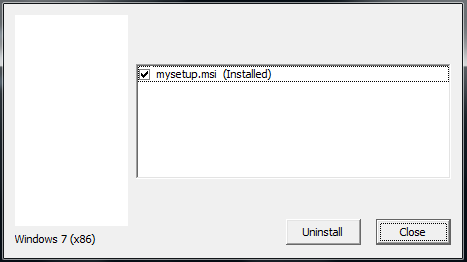 Great! I have an uninstaller, right?

What we need is a bootstrapper that can do uninstall, and that can be included in MySetup.msi, installed and used post-installation.

Save the Product Code

Use the Product Code

It is now possible to use this product code from registry for the uninstall package, a nice feature of DNI.

Including the Bootstrapper in the MSI

Once installed, the shortcut can be used to uninstall the application. During uninstall the MSI component will fetch the product id from registry and invoke msiexec /x.